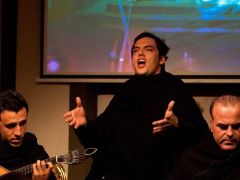 The cities University has the oldest history and the highest reputation in Portugal. It is possible to have a guided tour at the University, especially to see the famous library in manuelean style. Weekly fado concerts will be held in the historical centre of the city. The fado of Coimbra is only represented by men and has the impression of romantic serenades. Downhill you will find the "Jardim Botânico" (20 hectare). It is a terrace build garden with both tropical and subtropical trees and plants. 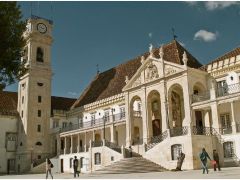 Originally, Coimbra was a settlement in the fordable River Mondego. The Roman Conímbriga is 18 km from here. The bridge that was built here was the most important connection between the North and the South. 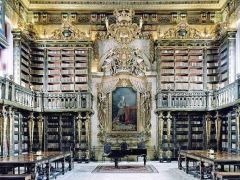 In the 18th century the current University became a fact. Coimbra is now the 4th City of Portugal. The city is gradually built on the right bank of the Rio Mondego. There is a lower town (Baixa), the triangle formed by Praça da Portagem, Praça 8 de Maio and the river. The upper town is located on the adjacent hill. Through the Arco de Almedina one enters the main street Rua de Ferreira Borges. In addition to employment in education it is found in the textile, food and ceramic industry.

Until the 1960s, students by their traditions determined the image of the city. Nowadays still many students are dressed in a black cassock (counter), with cape (capa negra). Study books are tied together with a ribbon worn under the arm. Each course has its own color.

The University remains very important for the atmosphere in Coimbra. Relax in the evening, dine in a restaurant located directly on the Mondego River or one of the many restaurants in the old town the Baixa.

In this region, called the Pinhal Interior, because of the great number of pine trees, also exist a lot of olive orchards, eucalyptus and citrus trees but also cork oaks and of course the big amount of &amp;amp;amp;quot;vinhas&amp;amp;amp;quot; vineyards. In spring the mimosa with it´s typical yellow sweet smelling flowers decorates this region. Often you will meet the peasant cart with the dunkey. A lot of the portugese people here live of agriculture. In the summer there are a lot of markets and festivals with music and dancing to honour the saint.